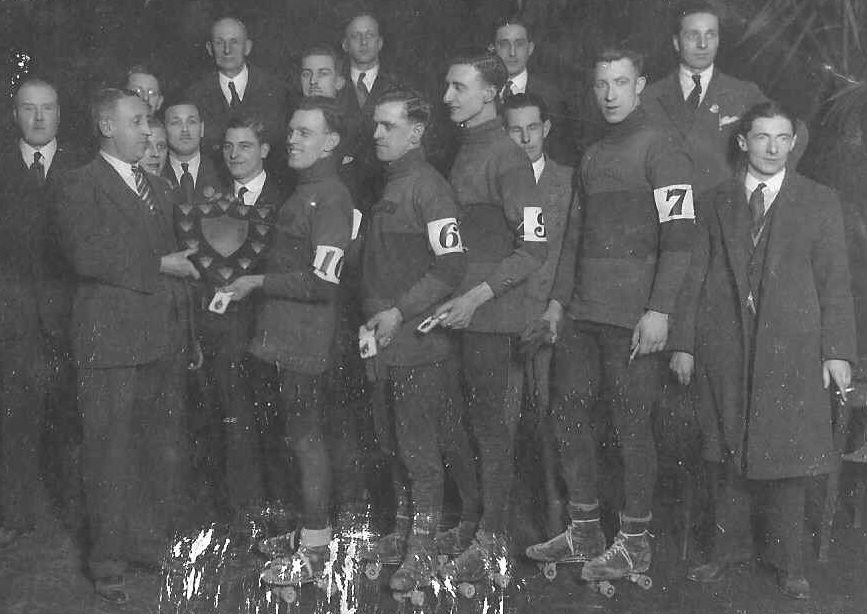 1930 - STUMBKE (No.7) AND TEAM MATES RECEIVE THE BURGOYNE SHIELD FROM SID COLE

Edgar Walter Stumbke was born in Walthamstow, London, in 1905 but moved across the marshes to Tottenham in 1914.  His early interest was in football representing Walthamstow Grange at a senior level.

Stumbke's first taste of success in a major event came on 30th January 1930 when he finished second to Bill Ross in the One Mile British Championship at Alexandra Palace.  The final consisted of four Palace skaters (Ross, Reed, Stumbke and Len Seagrave) and the story is that Stumbke, realising one of the club members would be going home without a medal, went all out to make sure it wasn't him.  In fact, it would be Seagrave who finished with that unfortunate honour.  On 27th February in the same year the same quartet that had been in the final of the One Mile Championship a month earlier became the winning Alexandra Palace team in the 3 Mile Inter-Club Relay Championship for the Burgoyne Shield.  This effectively ended a period dominated previously by the Aldwych speed team (with just a few exceptions since the inaugural event in 1923). 1931 was to be a similar story for Stumbke.  This time it was third place in the One Mile Championship but again victory was secured in the Inter-Club Relay Championship.  1932, however, was to be a definite turning point in Stumbke's speed skating career.

Helped by the fact that for the very first time, all three senior men's individual British Championships were to be on Stumbke's home track at Alexandra Palace, he went into the competitions in confident mood.  First up was the Half Mile Championship on 26th January.  Stumbke won this ahead of Reed and Ross and secured his very first individual title.  Next up on 23rd January was the Relay Championship at Leicester Boulevard, and again Alexandra Palace were victorious.  On the 4th February Stumbke could "only" manage silver in the One Mile Championship behind team mate Reed.  The final Championship was the Five Mile held on 18th February and again Stumbke was victorious.  He led for virtually the entire distance having noticed that the rink was slippery and making overatking problematic.  His tactics were vindicated when Reed attempted an overtaking manouvre on the last bend and slewed out wide through lack of grip and victory for Stumbke was assured.  Stumbke was duly elected speed captain for the club and in that one year alone Stumbke had cemented his name as one of the speed skating greats, but more was to follow. 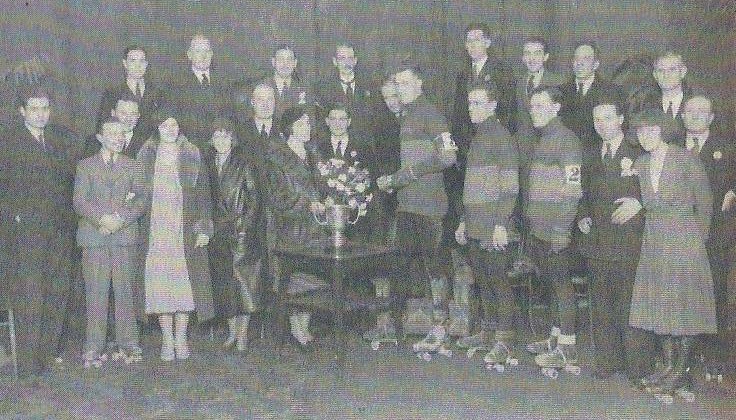 In 1933 he retained his Half Mile title at the Cricklewood rink, finished third in the One Mile and again was victorious in the relay

On 20th January 1934 Stumbke again retained his Half Mile crown, this time at the very tight Herne Bay Pier rink, becoming the first of only two skaters to win the event in three successive years (the other being Don Brown - 1949, 1950 and 1951).  Stumbke, however, can claim the distinction that he is the only skater ever to do so on three different rinks.  Later, he again medalled in the One Mile (silver) and made it five times in a row in the Inter-Club Relay Championship.  His victory in the Half Mile would be his last individual title and his medal in the One Mile his last individual medal.  It is said that Stumbke had a "disagreement" with the NSA at that time and that he made the conscious decision to withdraw from any further involvement in the Half Mile Championship.  His issue was that he maintained he was "promised" by George Lord, then head of the Roller Speed Committee, a replica of the Allworthy Cup should he win it three times outright, which of course he did.  After doing so and asking to claim his prize it was refuted by the NSA that any such offer was made.  As a matter of principle, Stumbke flatly refused to take part in the event again.  (It is not clear if this boycott extended to other individual Championship events).

Around that time, Stumbke's skating interest was now steering him towards hockey, although he still made appearances for the Alexandra Palace team when it came to the Inter-Club Relay Championship.  With Stumbke's assistance Palace were again successful in 1935, 1937 and 1938.  Stumbke's record of six consecutive gold medals and eight in total in this event was only equalled by his team mate Bill Ross who was in the same teams as Stumbke, and the great Les Woodley between 1956 and 1964 who heralded an identical set of statistics.

By the late 1930's Stumbke was well on the way to being an elite hockey player and indeed in 1937 helped secure the European Championship for the England team.  He was twice a member of the Alexandra Palace hockey team that finished runners up in the National (NRHA) Cup and with whom he won the Kent League.

In 1938 Britain played host to the very first World Track Championships for speed skating at Wembley.  There had already been a World Championships on the road in Monza the year previously and also a number of events billed as European Championships (1930 Anvers, Begium - road; 1935 Monza, Italy - road; 1936 Stuttgart, Germany - track) but this was an opportunity for British skaters to showcase their supremacy on home soil (Ross, Wilkinson and Reed had all won European titles in Stuttgart).  Stumbke attended the speed trials for the team at Wembley but was also selected to represent Britain at hockey in the same event.  He was not allowed to do both so had to make a choice - and he chose hockey.  The three selected British team members, Harold Wilkinson, Bill Ross and new boy Arthur Cooper all became British World speed champions at Wembley.  Stumbke had beaten all of these guys in national competitions and it will always be an unanswered question as to how he would have faired had his choice been different.

The decade was rounded off in 1939 with a trip to Antwerp where the Palace hockey team took on and beat the Belgian champions.  The outbreak of war effectively ended Stumbke's "formal" association with speed skating although after the war he resumed where he had left off with hockey.  He had further England honours and in 1949 travelled to Lisbon where both the World speed and World hockey championships were being played out at the same time.  It is understood that whilst there Stumbke fell ill with a stomach complaint half way through the tournament.  He had the option  of flying back early from Lisbon sitting alongside George Lord, but with the previous history between the two men Stumbke refused the offer and stayed with the team travelling back over land which took three days through Portugal, Spain and France. 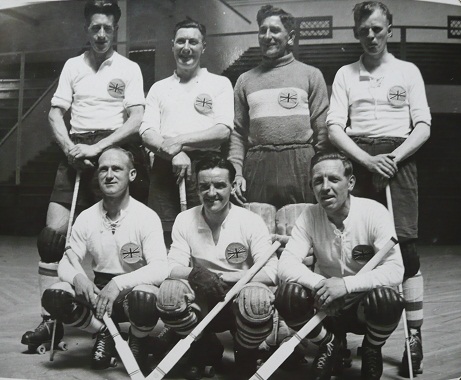 1949 - THE BRITISH TEAM IN LISBON FOR THE WORLD HOCKEY CHAMPIONSHIPS

He would finish twice more a runner up in the National (NRHA) Cup, collecting medals from both the Kent and Essex League and Cup competitions along the way, well into the 1950's.

Eddie Stumbke was unfortunate to have had his speed skating successes when major international competitions were either non existent or certainly very much in their infancy, however, British speed skating (and indeed hockey) were fortunate to have someone of Stumbke's calibre in their midst who generated a competitive rivalry that helped his contempories go on to be Champions of the World.