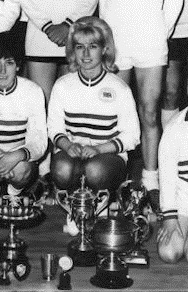 PAT WITH HER SOUTHERN CLUB MATES AND TROPHY COLLECTION c.1965

Carole Patricia Barnett, or Pat Barnett (No.7 in the list of female British team members) as she was better known, was born in London in 1934.  She became a member of the National Skating Association in 1956 and joined first the Brixton Falcons and then the North London Roller Speed Club, competing in many senior women's events in what was very much a male dominated sport at that time.  Until 1950 there had only been one British Championship event per year for women as opposed to three for men.  In fact equality within the sport would not come about until as late as 2004.

It's fair to say that Pat was the glamour girl of British speed skating.  She worked in a high profile showbiz environment as personal assistant to singer Dusty Springfield for many years, and would often bring the superstar to squad training sessions or get her to present the trophies back in the '60's.  But whilst Dusty Springfield was a star performer on the stage, Pat Barnett was a star performer on a roller rink. 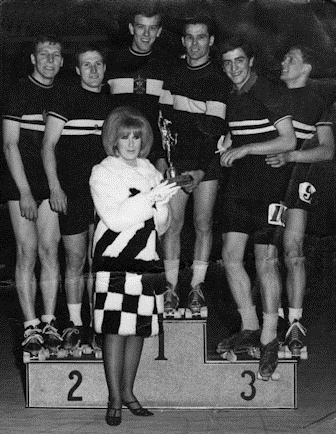 It was unfortunate in some ways for Pat that her skating career spanned that of Chloe Ronaldson's.  Whilst Chloe was claiming almost every British title she competed for, Pat was always just a step behind.  This in itself was no mean feat and should not be underestimated as an achievement in it's own right.  In fact, were it not for the odd unfortunate circumstance (illness at the wrong time or an unjust disqualification) Pat would almost certainly have won at least one British Championship.

Her first medal in a British Championships came in the 1959 Quarter Mile when she finished second to Chloe Ronaldson on the Herne Bay rink.  Over the next 20 years she would go on to win a further seven silver medals and eight bronze medals.  Considering that women only had two Championship races per year generally, (in some years, especially the early 1970's, there were none) this was an excellent achievement.  She did enjoy victory in the Vi Kirby Open Handicap Championship in 1960 which she won off 25 yards.  In additon, she also won the Inter Club British Relay Championship on three occasions with the Southern Roller Speed Club, of which she was one of the founder members.

Despite never winning an indiviual British title, her domestic form saw her represent Great Britain on numerous occasions over an 11 year period.  Her first outing was in 1960 in Wetteren, Belgium, where she would finish 8th in the 10000 metres.  But like the rest of the British team that year she was a victim of Bert Lamb's decision to withdraw the team due to what was felt to be "irregularities" within the International Judges decisions.  This decision to boycott also extended to the road and track Championships that were held a year later in 1961.

1962 would also see Pat set new World Records for every recorded distance from 5000 metres to 30000 metres on the Brixton Rink.  In fact she set no fewer than 13 new World Records across all distances and times.  Incidentally, many of these records still stand today as British Track Records, a remarkable test of time in itself!

For her remarkable efforts Pat was awarded the Vandervell Trophy - the highest accolade in the skating fraternity across all disciplines on both ice and rollers.  It was a fitting reward for such an outstanding achievement.

In 1965 in Siracuse, Italy she would medal in two of the three events.  Her bronze medals in the 3000 metres and 5000 metres were reflective of not only how good Pat actually was, but of just how high the standard was back in Britain having yet to win a British title.  Her next shot at a World Championship came in 1967 in Barcelona, Spain, and she came very close to realising her dream.  She would finish 4th in the 3000 metres, 3rd in the 10000 metres and 2nd in the 500 metres, just being beaten by local heroine, Pepita Cuevas of Spain, in a best of three knock-out final.  In fact, it was probably yet another "circumstance" that prevented her taking the gold.  It appeared that whoever drew the inside line of the track at the start of the race generally went on to win the sprint.  Pat had drawn this position all through the competition, and despite not being known for her sprinting, proved that having this starting position was key.  Unfortunately, in the final, it was the Spaniard Pepita Cuevas who drew the inside line and went on to take the victory.

She last competed for Great Britain at the age of 37 in the 1971 European Championships in Wetteren, Belgium, the place where her international career had begun some 11 years earlier.

Despite her retirement from international competition she would still continue to compete domestically for some years after.  Such was her class she would even secure a medal in her last British Championships, a silver in the 5000 metres in 1975 at the age of 41.

If you "Google" the name "Pat Barnett" you are sure to find many references to her time spent with Dusty Springfield and how she was pivotal in bringing "Dusty" to life.  But look at little closer and you will also see that she was one of our very own "British Skating Legends". 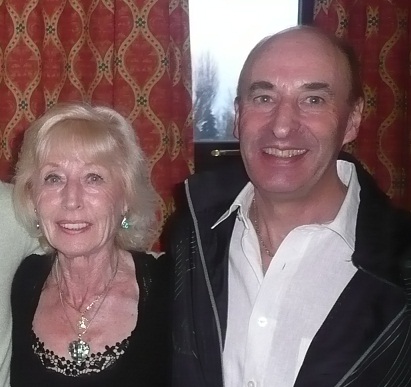